"The man likes beer more than some Aussies."

Fury is not the most physically imposing Stormtrooper ever to wear the armor. He is of moderate height and build, though years of military exercise and carting around the Army's kit have made him very fit. He has scars to prove his service, but not anything more than your usual veterans of many campaigns.

Behavorially, he is a credit to his moniker as he can be quick to anger over an injustice or crime. While able to see the gray areas that exist in this universe, he is keen to settle the score with anyone willfully trying to gain advantage on the backs of others. It makes for the occasional tense situation.

Josev was born in the small farming community of Kilren Settlement in the Outer Rim world of Bovo Yagen. The family concern was mechanical repair of farming equipment, plus whatever other odd piece of technology needed tending to. Kilren was just large enough to provide for a local education and just far enough away from a starport that one could stare at the lights coming and going from orbit and dream it was oh, so glamorous. At the age of 15, Josev stowed away on a supply freighter, leaving a note to his parents and sister that one day he would return. Thus far, it is the one promise he has not been able to keep.

After eight years of freighter service among various shipping companies, Dar'Namell joined up with a privateer outfit that raided shipping in the Hapan Consortium. During this time he spent many hours training in gunnery, boarding tactics, and some starfighter training. The rest of his time was spent repairing the ship and equipment, picking up a working knowledge of most starship systems. After a raid on a Royal Hapan barge headed for the Queen Mother's orbital station, Star Home, a death sentence was placed on the crew at large; the majority of the crewers jumped ship at the nearest port before names could formally be added to the sentencing.

It did not help. The ship was impounded and the ship's data - including crew roster - were taken into custody and formal charges issued. He had no choice but to sign on to the next crate off-planet. Two pirate gangs and a few years later, Josev jumped ship at Sullust, tired of earning pay amongst the truest dregs of society. Knowing full well that a man alone with a death sentence on his head - even from the remote and isolationist Hapes Cluster - was not going to last long by himself, he found by the nearest Imperial recruiter, essentially a drunken thug at the back of a bar who knew of a shuttle headed for the Remnant.

From there he was taken to an Imperial outpost, whereupon he was assigned to the Vast Empire and sent to a military academy. His flying and ship skills were noted, and promptly ignored for ground combat duty. Once trained, he was sent to Raiders squad, WildCard Platoon, serving there as a trooper and later a squad leader after a very short stint in Iron Horse squad. Later he was promoted as platoon commander and later company commander of Phoenix Company. From there, he was promoted to Army Executive Officer, then Prefect, where he assembled the best staff in the galaxy to keep the Corps in top shape.

When confronted with an ethical dilemma, Josev relinquished his position as Prefect and retired from the Corps to focus on working full-time at Imperial Center. While a difficult decision, it was a necessary step to take. The bigoted remains of the old Empire are still enough in power to make all the post-Palpatine rhetoric a lie. He was not going to lead an Army of violent racists, and would not be told to stand by and just let vile behavior occur without punishment.

During his military service, a non-military venture of note brought Fury into the world of commerce. Along with the veteran members Talon & TJ, he has helped expand Imperial Center into a full-service shop where Vast Empire members can purchase items and generally run amok as consumers in an Imperial economy. Still expanding and experiencing growing pains as it finds new market niches, it hopes to be more responsive and adaptable as time goes on.

Recently, Imperial Center has aligned itself with the privateer outfit The Osk Company to pursue some new avenues for revenue. It takes IC into some gray areas of the economy, but some risk must be taken for profits to be gained.

Supreme Moff Kadann asked Dar'Namell to come back into Imperial Service after six months of being left more or less to his own devices. As usual, it was difficult to say no to the man in charge of the Empire who had also been very, very good to him and his crazy ideas, so he once again will adorn the Fury callsign and is now the Operations Officer for the Vast Empire.

Josev does not let a lot of people into his life, particularly those he serves with. It is truly lonely at the top. That said, he's been known to sit at the High Command gaming table a time or two as well as hang out with his Army High Command officers for various hunting trips and the like. These days, his status in those venues is strained, at best.

Professionally, he has made acquaintances of Imperial officer Jeset Timms, commander of the 508th Imperial Dragoons, as well as Commodore Kara Elith, captain of the Star Destroyer Dominion. Seeing as they still take his calls, he considers them more than mere acquaintances.

Since the opening of Imperial Center, he has been worked very closely with his agents, particularly the fixer Kuin, master slicer Paler Kraik, and pilot Jinx Zaron.

From his background on a Corellian-explored trading world, to working as a freelancer, to visiting various planets as an Imperial officer or as a merchant, Dar'Namell has been able to learn and be fluent in the following languages:

The following languages are those he is capable of understanding, if not quite speak himself:

Character image the result of a commission at SWAG (Star Wars Artist Guild) and is the excellent work of Mercy. Thanks much! 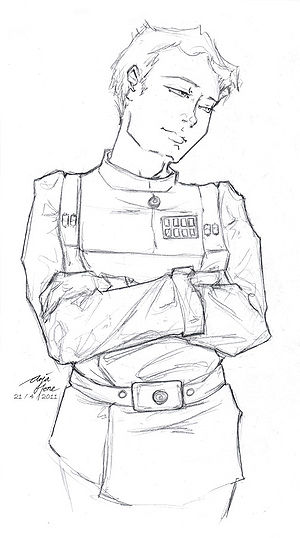 "The main thing that interested me was the idea that this guy had risen to be a Moff, but it wasn't really who he was - he was a rogue, a schemer and maybe even a thrill-seeker. So I had this kind-of idea of him, dressed in his Moff uniform, leaning against a wall and dreaming of the blue yonder as he looks out towards one of his prized ships." - Mercy on describing the concept