Demetrius 'Hades' Aita is a human from the crime-infested world of Nar Shaddaa. He was recently pulled from the Starfighter Corps, simultaneously stepping down as Chief of Naval Training. He has previously served as a Squadron Commander beforehand of Gundark, Chlovi and Tuk'ata Squadrons and flight member in Tuk'ata, Nightshrike and Jexxel Squadrons. Recently, Hades returned to active duty in Jexxel Squadron, being promoted to the rank of Lieutenant Commander.

Running away from home at a frightfully young age, Hades was brought up around all kinds of criminals and scum. However, he managed to make something of himself amidst the muck, starting a youth group and leading it to become an armed gang that protected and educated local homeless children, as well as struck blows against slavery. A botched operation when he was 19 saw Hades fall into the hands of the Galactic Empire's prison world of Kessel. Three years passed before he was offered a way out through service with the Vast Empire's Navy, during the last days of the Galactic Empire. He has since committed himself to the task of reinstating the proper status quo through the Vast Empire, rising through the ranks in his ardent pursuit of order.

He currently holds the rank of Lieutenant Commander as a Flight Leader in Jexxel Squadron. 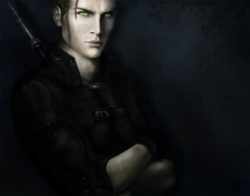 Hades, at 5"11 and 85kgs was not exceptionally heavy or tall.. however, he was extremely fit, his build was muscular, yet slim from years of surviving in the criminal world of Nar Shaddaa. He displayed speed, agility and strength born only of one who needed such skills to survive. A scar ran from the end of his left brow, around his left eye and down onto his left cheekbone.

Hades was extremely cunning and quick witted, usually having a sense for danger.. however, he often found himself getting into it due to his love for adventure and his thrill seeking tendencies. He was moody at times, being polite and cold with barely a minute between the attitudes, sometimes alienating his own friends. He had a tendency to be 'grumpy' in the mornings, resulting in a bad mood perpetually throughout the days of the week. He hated drugs, including deathsticks, and made a foolish habit of stealing people's deathsticks and flushing them down the 'fresher. He often spoke sharply to others as his mind followed its train of thought, at times offending people by his accurate insight. Although he had stolen while in the gangs, Hades was no thief; he stole only what was necessary for survival and did not steal from those who had nothing else to live on.

Some people thought of Hades as reckless, if not insane, but that was never clinically proven.

Born on Nar Shaddaa as the child of two poor parents, Hades had no destiny other than poverty ahead of him. However, at the age of 3 he escaped from home, displaying remarkable courage and perseverance to do so. He found shelter at a local orphanage, hiding until his parents came for him. He escaped again, this time with the help of an Imperial deserter, Jarv. Hades and the deserter scavenged what food and shelter they could from the local gangs, which often got them into sticky situations, saved only by his quick thinking. Even as a child he showed speedy decision making. Until the age of 7, he lived as a scavenger - on his 7th birthday, however, he and the deserter met another child on the run who had 3 more children with him.. they decided to form a gang of sorts to better ensure survival. The gang grew in size, attracting children and youths from poverty to run away and join the gang. Eventually they stole some weapons to ensure their own safety and became unwittingly an armed gang.

They held up several diners and tapcafes, which gained the attention of the local Hutt Cartel. Hades himself was captured at one point and tortured by a Hutt, gaining the scar on his left eye. During his time in the gangs he learnt Mando'a, Shyriiwook, Minnisiat and Huttese. By the age of 17 his gang had grown into an armed faction on Nar Shaddaa, and was often hired for protection or for raids.. however, this was not to be.. on his 19th birthday, Hades' gang raided an Imperial munitions depot, as they were running low on ammunition. The attack was a failure, and Hades was captured saving one of his men. He was sentenced to life imprisonment on Kessel, never to be heard from again... 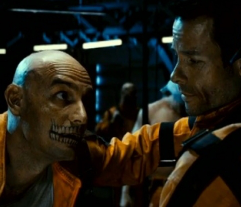 Hades (right) and one of the most despicable inmates he met, fondly known as Smiley.
While there, Hades was subject to torture and interrogation again and again. The warden there believed him to be a Rebel Spy and would not let up until Hades gave in. He never did, though, so his captors made his existence there constant torture, a living hell. Hades took it on himself while there to escape onto Kessel's surface. Having overwhelmed a group of guards with four other prisoners, the quintet of escapees took the breath masks and fled across Kessel's surface. They were out there for days and Hades, along with the other prisoners, had to cope with extreme conditions and survive under intense pressure. He managed to keep all of the prisoners up and going until one died of exhaustion.. That is to say, he was too tired to carry on and subsequently died of thirst.


The escape was short lived, lasting only a few days - though those days seemed like weeks to Hades - before Imperial forces caught up to the prisoners, now only a quartet. Hades thought it was back to the standard routine but no, instead of back to the main prison complex, the Prison warden had decided to send Hades down into the terrifying spice mines. Hades felt certain there was no way out of this, and said his goodbyes to the surface. He had heard the stories - they all had - the spice mines were bad news in any context.

However, his competence had attracted the attention of an Imperial Officer present at the munitions depot. This Imperial Officer, unbeknownst to Hades, had been on the verge of being arrested for treason by the troops. So Hades had unknowingly saved his life.. 2 years later as the larger Empire was collapsing, the officer found Hades and put to him an offer that would repay his debt to Hades - serve the rest of his sentence, or join the Imperial Military, of the newly formed Vast Empire. Hades had always been awed by the Imperials, it had been his dream as a child to join up, and so he did so with enthusiasm...

Upon joining the Vast Empire and passing basic training, Hades was promoted to Senior Crewman - though he failed to attain the Star of the Academy - and assigned to Nightshrike squadron, under his first ever Squadron Commander, Seth Qorbin. Soon thereafter, though, Seth Qorbin was promoted to Wing Commander and Fyston took over as SCO. Fyston soon went AWOL and the majority of Nightshrike was transferred into the newly opened Tuk'ata Squadron. Not long after that, Hades was sent on a mission with SMC Surprise under its captain, Trykon, who had just joined the ranks of the VE's Officer Corps. Hades displayed bravery and efficiency throughout the mission and was promoted to Petty Officer 2nd Class, as well as receiving a Cross of Bravery and a Combat Achievement Ribbon.

Hades arrived back from the Battle of Brinlik, having earned himself six kills, two medals and a promotion. He thought he was on the fast track for the rank of Squadron Commander but instead was assigned to Tuk'ata in the wake of the newly appointed Squadron Commander's departure. This led to the Wing Commander, DeepSix, assigning an ex-slaver by the name of Sayree to the Squadron as Commander. Nobody in Tuk'ata liked the Zygerrian SCO, but they followed her nonetheless - Hades even earned himself ace status under the authoritative and ruthless woman. She was assigned to DeepSix's pet project, Razor Squadron, shortly thereafter.

Following that, they were assigned a Squadron Commander by the name of Wager -- one whom liked to deliver speeches that he saw as inspirational, but ended up doing little else. After a brawl in a bar aboard the Atrus, Warrant Officer Wager was sent into a coma by a blow to the head. This sent Tuk'ata into a frenzy - Ryn had already been appointed as XO and Hades as Flight Leader, but it still left a power vacuum that was waiting to be filled. For now, Ryn and Hades filled the roles of SCO and XO respectively.

Hades' tenure as Flight Leader did not last long either - only one mission before Hades was officially appointed SCO and promoted to Senior Chief Petty Officer.

Hades led the squadron through a difficult time as they were assigned to the VSD Brilliant, under the newly promoted Commander Trykon. They participated in the first scouting run of the Bloodmoon passage and the first incursion thereof - not an outright failure, but not a success, either. It was here that Hades was shot down and captured as a prisoner of war, taken and interrogated aboard the vessel of his nemesis, Okyr Vrail.

After the Battle of Bloodmoon, Hades was appointed as Gundark SCO for a short period in an OOC capacity.

After the former Commander - Dunny - left, Hades was transferred to Chlovi as the Squadron Commander, again in an OOC capacity whilst he was on Tilsec Prime with VENI, IC. Thereafter, Hades was assigned to Jexxel Squadron as a Flight Leader for insubordination, but also as a way to keep the shattered squadron in line. During the subsequent battle, Hades was captured by enemy forces.

While having distinguished himself in escaping, Hades was reassigned to Jexxel once more as a Flight leader at the behest of the CNW, his old friend Pherik Zail, with the promise of a reward if he served his tenure with honor. 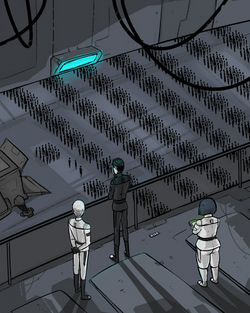 Hades resigned his duties with VENA shortly before his capture. 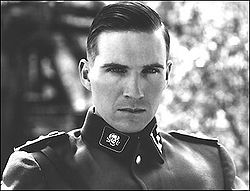 It is suspected Hades was recruited by the infamous Grey, but it is not known when, how or what missions he's been on with the mysterious Naval Intelligence Department. Rumoured to have a hand in the quashing of the uprising on a VE-loyal prison colony, Ord Vaug, Hades has had various trips that have been either mysteriously marked as 'leave' or otherwise entirely unlisted. Little else is known of his VENI exploits other than that they changed him psychologically.

However; it is known that he was part of the VENI team to Tilsec Prime, having got there aboard a 'borrowed' TIE Vanguard. Once there, Hades met up with Agent Blade, VENI's man on the ground as they made preparations for the main team. Having met up with the main team - including the mysterious Ensign Grey - Hades was split up from the main team with two other agents, Grin and Grim, to provide overwatch.

During his capture, Hades was interrogated about his duties with VENI; somehow his nemesis, Okyr Vrail, not only survived the fall on Tilsec Prime, but fell in with the New Republic as well.